Interview techniques: use a poorly-written press release as a case study

Most of the marketing positions I’ve offered over the last few years have fallen into one of two camps: more qualitative/verbal, requiring lots of writing, or more quantitative/analytical, requiring lots of analysis.  Ideally you’d like someone that has some of both skills, but I’ve found that more often than not, people naturally fall into one side or the other.

Simple case studies can be a very effective way of helping you to determine if you’ve found the right candidate fit for the open position. In this post I’ll focus on a case study that’s appropriate for writing-intensive positions.

The two first clues about a candidate’s written communication skills are the resume and any email correspondence you have with them.  If there are serious mistakes there, move on.  If those are in good shape, though, I also use a simple, 20 minute case study (usually at the end of the 2nd round interview) that has served me very well.

I write a 3/4 page, fictitious press release that’s filled with spelling, grammatical, stylistic, and formatting errors.  I tell the candidate that this is “the world’s most poorly written press release” and that I’d like them to take “about 15 minutes or so” to read it through, mark it up, and note the mistakes.  I bring them a soda and give them time alone in a quiet room to do the exercise.

This isn’t meant to be high pressure or stressful; generally I find that candidates either know this stuff or they don’t.  Those who know it find it a breeze, and those who don’t wouldn’t have done any better had they been given 2 hours to do the exercise.  The point also isn’t to test every obscure rule from style guides, but rather to get a general sense of how carefully the candidate can assess language and how much they know – and care – about proper grammar.

I pepper the press release with spelling mistakes, run-on sentences, subject/verb tense disagreements, dangling modifiers, and non-parallel constructions.  Few candidates catch everything, but generally I find that people get either about 20% right or 85% right.  If you’re hiring for a “verbal-heavy” position, you’d better be sure the candidate falls towards the 85% side.  Because I happen to be particularly sensitive about my employees expressing themselves well in writing, I even require that my “quant” hires do well on the test. 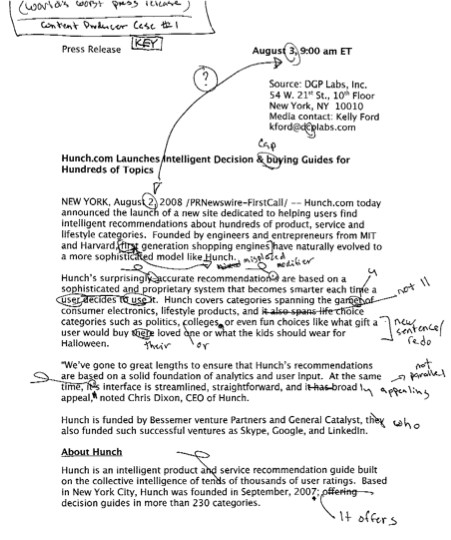 Finally, a word of caution: if a college graduate hasn’t learned (or is too lazy to use) proper grammar by the time they finish college, it’s unlikely you’ll be able to correct the issue.  I had an employee once who was in a quantitative role, so I didn’t expect him to be writing Shakespeare.  Yet the emails that I saw him write to vendors or contractors were just plain embarrassing because they had so many errors.  It made our department look bad and reflected poorly on our company.  I had to play the role of elementary school teacher, creating tables of the common errors (its/it’s, there/their/they’re, you get the picture).  Yet it just didn’t sink in; it’s hard to teach someone basic skills that they should have learned by the time they were 12.  More fundamentally, it’s nearly impossible to teach someone to care about this stuff if they really don’t.

Bottom line: if written/verbal expression is important to you and for the position you’re filling:

1) Demand near perfect written expression in the candidate’s resume and subsequent email correspondence.

2) Use a “low time pressure” case study to confirm the candidate understands the basics of strong writing and proper grammar.  A fake, poorly-written press release is a fun way to do it.

3) Don’t expect that you can teach college graduates to care about grammar or use proper grammar if they don’t already.

2 responses to “Interview techniques: use a poorly-written press release as a case study”