19th Street Gym NYC: Down for the count?

Closed for now, or closed for good?

Note: The most recent update (at the bottom of this post but before the comment section) is from: January 16, 2010. See info about the gym’s reopening in a new blog post here.

This past Tuesday, November 17th, 19th Street Gym shut its doors, lowered the metal grate in front of them, and posted a simple sign on a piece of paper: “Sorry for the inconvenience – will reopen on November 18th”.

As of yesterday afternoon, November 20th, that same sign was still there.  Their phone number just rings (not even a message), and there’s no notice to gym members on either their website or facebook fan page. 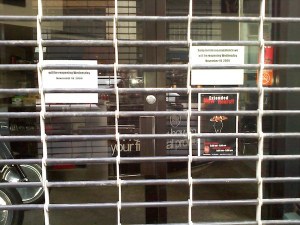 We'll reopen in a jiffy, promise!

On Nov. 18th I contacted a friend who is a trainer and he said his understanding was that the fire marshal had ordered the facility to be closed due to a building code violation, that management was in court, and the gym should reopen on the 19th.  No such luck so far.  As of this morning, their phone still rings unanswered.

Whether this is a temporary issue or whether the gym is closed for good, this is no way to run a business.  At a very minimum, they should keep their members informed about what’s going on via a phone message, sign on the business, and information online.

This is all a real drag, because I actually like the gym a lot.  It’s never crowded (uh, maybe that was the problem), it has the equipment I care about, and it’s convenient to where I work and live.

The whole thing seems particularly fishy in light of the fact that the gym was resorting to increasingly aggressive renewal tactics in the last week or two to drive memberships.  (Paul says he was called 3 times out of the blue, with the initial offer for $599 for 15 months and then repeated sweetened offers when he said he didn’t want to renew yet).

Members who charged their membership to a credit card may have a remedy.  I’ve already contacted AMEX to dispute the full amount of a membership renewal which begins in January.  AMEX was very helpful.  Presumably it’s also possible to dispute the remaining portion of an existing membership, so that will be the next step.

Even if it reopens next week, it seems dubious that this gym can properly operate as an ongoing entity.

Doesn’t look like this place is going to reopen.  The possible good news is that apparently NY State law requires health clubs to provide a $50,000-$75,000 bond, payable to “The People of NY State”, as a contingency for this very type of issue.  Whether or not 19th Street Gym was in compliance with this law I’m not sure, but I inquired with the state’s Dept. of Licensing in Albany to find out (I’ll re-post when I receive an answer).

I’m also filing a complaint with the Manhattan office of the State Attorney General.  The AG’s office has successfully gone after health club owners who have abruptly shut down, even barring them from ever opening another club in the State of New York.

I’m only out $500 here over the next 12 months.  It’s not a huge deal, but it’s just hugely irritating because these folks were trying to hawk new memberships and renewals up until the day the doors slammed shut.  That’s fraud.

Here are some pictures I took today.  At least somebody is posting information on the premises now.  Doh! But that’s just Equinox, offering $0 initiation for 19th Street members, and also asking former 19th Street Trainer’s [sic] to “come on down and apply!”

Equinox seizes this as a marketing opportunity. Who can blame 'em?

Members lost a gym, but trainers lost their source of livelihood. Bad all the way around.

One interesting thing: the two motorcycles (I think they’re basically nonworking props, but still…) that were left in the lobby suggest that perhaps this was not a completely planned and premeditated closure.  Still, once the gym closed, the ownership/management seems to have sort of skipped town. 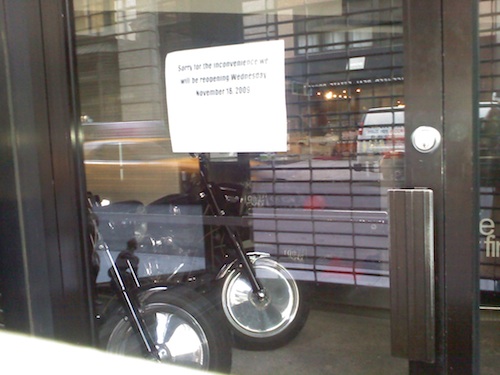 2 motorcycles are still remaining in the entranceway.

I tracked down and talked to the owner of the building, who said 19th Street owed “a lot” of money.  He was very nice on the phone and said he sympathized with members.  I asked him about the possibility of retrieving personal property from rented lockers and he was amenable to setting up a time with the building superintendent sometime next week in order for members to come in and get their stuff.

I’ll talk to him again on Monday to try to set a time (I’ll shoot for 6:00pm or so next Tue or Wed) and will post the information here and via a Facebook post.

I scheduled an appointment with Adriel, who mans the visitor check-in desk at the main 22 W 19th St building entrance, for 6pm Tuesday, Dec 1 to retrieve personal items from locker rooms.  Anyone who wants to get their stuff should come by a few minutes before 6 on Tuesday so we can go in as a group and minimize the inconvenience for the building’s staff.

Incidentally, Adriel also worked out at the gym and hoped that it would reopen.  The last he heard was that the most recent meeting between the building’s owner and 19th St. management went “well” and that it was possible the gym would open “later this week”.  Best of luck if they do.  At this point I (and I know many other 19th St. Gym members) have simply moved on.

I received an email today from a former member whose trainer passed on the following information. This has not been confirmed through other sources, though:

Side note: If you’re going to dispute a charge with your credit card issuer, you should do it as soon as possible.  Turns out that many issuers have a policy that disputed charges must be declared within 60 days from the end of the billing cycle on which they were posted.  That means that if you recently renewed, you’re probably in pretty good shape.  But if you’re more than 3 months or so into your current membership, it may be much tougher to recoup the residual value of your remaining months.

Since today marks the 1 month point since the gate came a-tumblin’ down, it seemed like an update was in order (even though there’s little new to add.)

Several people have emailed me to ask how to contact the building’s management to retrieve things from lockers.  To do so, go in person to the main entrance to 22 W. 19th Street (it’s two wooden doors east of the gym’s entrance).  Ask for Adriel at the visitor check-in desk or alternatively Henry, the building’s superintendent.  They should be able to grant you access or at least schedule another time to do so.

Other people have asked for tips on a similar type no-frills “muscle gym” in the city.  I dunno- I suppose there’s Gold’s on W 54th, or Steel on W. 23rd.  This would probably be an opportune time for me to make a shameless plug for you to try Hunch.  There’s a decision topic on Manhattan gyms which might include some you haven’t yet explored.  Answer questions on the left side of the screen and you’ll see the gyms change on the right side to reflect your preferences.

Someone emailed me the following info:
“Apparently the landlord has eleven different parties interested in the space. Whether or not they were all interested in it as a gym isn’t clear. Of those eleven, there were two that the landlord favored. One is a corporation and one is an independent group…both looking at the space to remain as a gym. Even though the landlord favors those two, he is still reviewing all the applications.  A decision will likely be made within another week or so.  Right now, if it’s to be a gym, it is supposed to be back open by February.”

The motorcycles have now been removed from the lobby.  (Someone emailed me to say he witnessed this happening on 12/30 at 9:15pm, with 5 guys including the former owner doing the removal).  Out with the old, in with the new?

Someone emailed me the following info:

“The space has apparently been leased to Complete Body.  Aside from new cardio equipment everything else should remain the same.  February 1st is the target date to reopen.  It’s unclear what arrangements/accommodations will be offered to former 19th St. Gym members.  But word is that the gym’s new owners do want to make sure that the independent trainers come back.”

Given that real news is happening again, I’m going to turn comments back on.

It’s confirmed: the gym will reopen under the management of Complete Body, whose CEO posted a comment below.  Target dates are:

I’m going to start a new post with more info as soon as I get some additional info from Complete Body.

** Please take a brief, 30 second survey I put together about whether you’ll be returning to the gym. **