It’s official: after shutting its doors last November, the former 19th St. Gym is finally scheduled to reopen on February 1st under new management, and will be called Complete Body & Spa.

Alex Reznik, the CEO of Complete Body, called me tonight and we spent 40 minutes discussing his background and his plans for the gym going forward.

Alex comes from a personal training background.  He’s Russian and spent time in Russia’s special forces, specializing in “hardcore, Army bootcamp training.”  He moved to the US 20 years ago but his company still manages personal training at several gyms internationally including the gym in the Moscow Ritz Carlton and a small workout studio in Paris.  He also plans to open a gym in the near future in Tel Aviv, which is where most of his family resides. 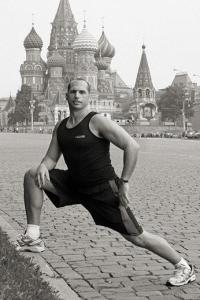 Alex is openly gay and has done his research about what many people cited as the most appealing aspect of 19th St: the interesting mix of people.  He’s the first to admit that he doesn’t want to compete against David Barton or Equinox, but rather to try to have a unique space and attract an eclectic mix of interesting people.

At one point Alex asked me about lighting: “Do you find it too bright or too dark?”  (my answer: “A good compromise; DB is so dark that you can’t find your locker, and NYSC and Equinox are so bright that you feel like you’re in an operating room.”  He concurred).  In fact, Alex asked my opinion about at least half a dozen other aspects of the former gym.  And he said he’d like to hear from more 19th St members about what worked well and what didn’t.  So please post comments below to share your thoughts.

Rough prices for memberships will be about $999/year for new members and $799/year for 19th St. members, with additional months for former members credited on a “case by case” basis (former members will be asked to show proof of their contracts).  Memberships would also include towel service and a few personal training sessions.  A nice new perk is for laundry service, where you turn in a bag (typically containing 1-2 days of workout clothes) that the gym will launder and place back in your rented locker.

Alex says that his target is to get 500-800 members (“1,000 max”), after which he will try to throttle memberships by requiring members after that number to only come with a personal trainer.

When asked how aggressively he would honor the contracts of former members, Alex says: “You have to realize that the former gym was $100K+ in default of rent and aggressively selling cheap memberships in the weeks just prior to closure.  That former entity no longer exists, and my new rent is even higher.  So while I’d like to honor those renewals, it’s just not feasible from a business perspective.  But I’ll work with people on a case-by-case basis to do what I can.”

There will be a “pre-sale” opening on the gym’s premises starting January 20th. The gym will then open to former members on February 1st, with the main opening on March 1st.

Alex is planning a “couple hundred thousand dollars” in renovations, including turning the mezzanine level (reached from the staircase at the end of the entrance hallway) into 3 spa rooms.  Spa services will include facials, massages, scrubbing, and waxing- “just not pedicures and manicures,” Alex says.

The Southernmost area of the gym (with the speed bag and the punching bag) will get a wood floor for classes, which will likely be offered at a nominal supplemental charge.  Cardio equipment will be replaced, a limited amount of weight-resistance machines will be replaced in the short-term, and bathrooms/locker rooms will be upgraded on a “medium to longer-term basis as the gym becomes profitable,” Alex says.

Complete Body also has a location at 80 John St.  Members at the 19th St. location will have access to the 80 John St. location, and vice versa.  Alex also plans new gym openings on the Upper East Side and Upper West Side, of which one location will include a pool.  Once open, these will also be available for use by members.

Alex has had only limited interaction with the former 19th St Gym management (and in fact hasn’t yet gotten access to the member database).  But he is planning to meet next week with Brian Moss, the original owner of the gym when it was known as “Better Bodies.”  His goal is to try to recreate some of the elements of what made the gym unique, including things like posting original pictures such as the one below. 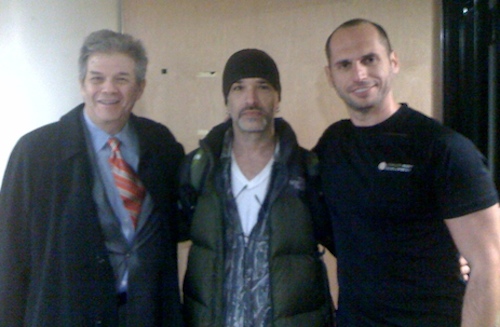 Finally, just for kicks, I set up a brief, 5 question survey to see how many former members are planning to come back.  This takes all of 30 seconds to complete, so please give it a go and I’ll publish the results.

The comments below certainly express a fair amount of skepticism among former members.  But let’s take a look at the survey results to look at what people are saying in aggregate.

42 people have taken the survey so far; you might or might not recall from a basic stats class that this is (just barely) enough to be statistically significant if the people taking the survey are representative of all former members.  Well, they’re not (necessarily), so the first thing to keep in mind is that the survey reflects only the people choosing to take it, so opinions could vary substantially among those who didn’t take it.

This was also an ‘open’ survey, in which responses were not controlled by, say, a verified email address to ensure each person participated only once.  That said, I did quickly browse through the IP addresses of the responses and there were only two sets of duplicates.  That’s quite plausibly explained by two former members in the same household, for example. (and one of those two dupes was my own, since Paul and I share the same computer).  So my point is that while this is not a scientific survey by any means, there’s no obvious indication that anyone was trying to ‘game’ the results.

Finally, I filtered the survey’s results below to include only the 39 people who indicated they are ‘clients’ (as opposed to ‘trainers’ or ‘something else’).

Enough with the caveats.  Here’s what the data says.  And apologies for the small font sizes on the charts; maybe I’ll improve that at some point.

1) Bad news (for new management): Most former members had more than 6 months of membership remaining on their active membership when the gym shut down.  This probably translates into a lot of grumpy people:

2) Better news: Only 13% of respondents had a pending renewal which had not yet begun.  (side note: I was one of those, but I’m happy to say that AMEX did finally refund 100% of what I paid) 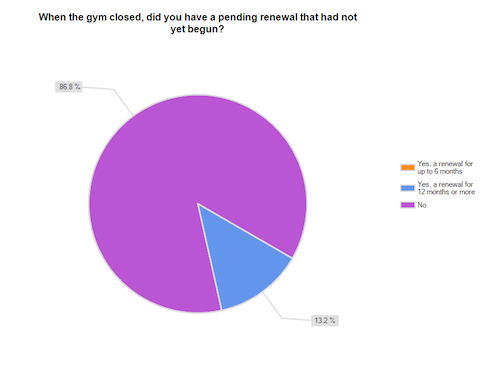 3) Mixed news: About a quarter of respondents have not joined a new gym since 19th St. closed, 40% have joined one with only a short-term or month-to-month commitment, but the remaining 37% have joined another gym with at least a one year commitment (that’s the group where I fall): 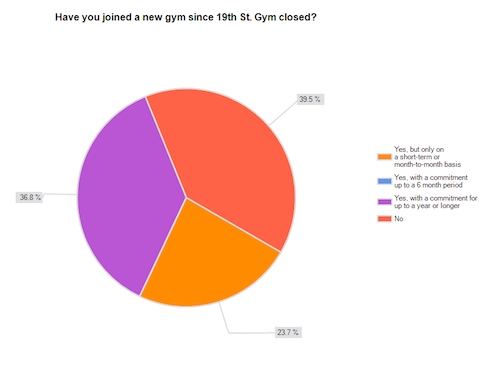 4) The net ‘pretty good’ news (for the new management): Nearly half of the survey’s respondents indicate that they would come back “right away”, assuming “reasonable pricing.”   26% say they’ve simply “moved on”.  The remaining 25% fall somewhere in between. 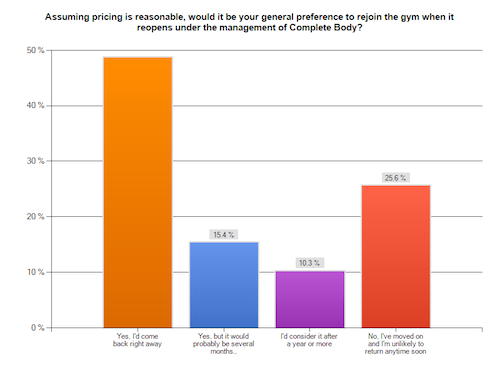 Now that actual pricing has been announced and former members are able to find out exactly how much the new management may work with them, it’s possible these numbers could change some.  If they do change significantly over time, I’ll post another update.