My partner Paul and I recently went to London for a long weekend and for the first time for us both, we flew Virgin Atlantic. Neither of us sleep very well on planes, so we generally try to fly business or first (using frequent flyer miles) when we travel internationally. We’d be the first to admit it: flying premium class internationally is part of the vacation for us; it’s not something we do everyday, and it’s a nice way to kick off the holiday in a special way.

Virgin offers 3 classes of service between NY and London: Economy, Premium Economy, and Upper Class. We didn’t have enough miles for Upper Class (and it wasn’t available, anyway), so we chose Premium Economy. My guess is that Premium Economy was introduced because so many companies stopped being willing to pay for Business. It’s a way to give business travelers a little more comfort than economy while still keeping an eye on the bottom line. While we weren’t expecting this to be a true business class, we figured that as the middle class of a 3 class international flight on a high quality airline, it would likely be fairly close to Business Class. Mmmm…not so much.

The Premium Economy seating configuration was 2-4-2 on the outbound 747 and 2-3-2 on the return A-340.  This is loads better than the 3-4-3 layout (brutal!) or 2-4-2 layout in each respective aircraft’s economy cabin, but tighter than a typical Business Class cabin would usually be (2-3-2 or 2-2-2) on comparably-sized aircrafts. Here’s how we’d classify additional amenities of the service, focusing on comparison to a typical business class vs. economy class:

Seat pitch: Fair. A step above economy for sure, but we definitely felt like we were sleeping in a severely upright position. No comparison to how much you can lean back in Business Class.  Anyone much taller than my average 5′-10″ height would have been really uncomfortable. We slept so poorly that we arrived exhausted in London and lost half a day taking a 3 hour nap.

Seat controls: Basically the same as economy. One button to lean back, another which was purportedly for lumbar support, but seemed to do nothing.

Seat foot rests: Poor. Foot rests in Premium Economy do not extend outward from your own seat (as is usual in business class), but rather are only a hard ledge which extends downward from the seat in front, like the footrests you’d find on a Greyhound bus. Paul, with his short legs, loved it…I found it unusable and irritating.

Seat power: Fail. Virgin somewhat apologetically explains that Premium Economy seats come with DC power that you can use with a special adapter for laptops. They sell those adapters (as available) for a jaw-dropping £69. No thanks. We didn’t have an adapter, but I looked for the outlet anyway; I couldn’t find it. Neither did I see a single other passenger on either the outbound or the return flight who seemed to have any device plugged in. Either the outlets aren’t there, or they’re so inconvenient that they might as well not be. Considering that Virgin America offers true 120V AC power in each seat, I think Virgin Atlantic needs to step it up here.

Entertainment hardware: Ok. Individual, decent-sized screens were in the seatback in front of each seat. This was ok but not great: Paul found them too far away and too small. And strangely, when I peeked back in economy, I saw that they had ‘swing up’ screens from each seat, which is the typical model for first class or business class. So I think Premium Economy got the short end of the stick on this one. 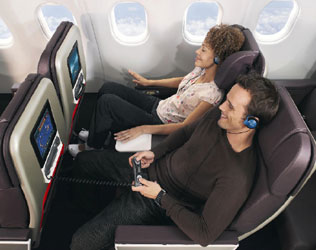 Entertainment content: Really strong. Excellent selection of on-demand movies and TV series (even if a lot of them were British comedies I had never heard of). The video controllers had some software quirks that made them tricky to use (Paul had the same problem); I think they need a better UX person to give them a hand. But overall, no complaints.

Main meal: Poor. Essentially an economy meal in every way. 3 choices of main dish (including one vegetarian), no options for appetizer or dessert. Everything was served at once on a single tray. Wine was served in a glass so small that we jokingly called it the ‘thimble’.

Wine selection: Poor. Two options (just one white and one red) of Spanish wines which were fair but no better than what we’d expect in Economy on an international flight. In a cabin this small (50 people or so at 100% capacity) there should have been more choices.

Snacks/beverages: Outbound: pretty poor, but then again, most people were sleeping. On the return, it was great. It seemed that every 15 min. they were coming through the cabin with juice, ice cream, fruit, water, etc. Very nice. Although I did miss the fresh/warm chocolate chip cookies which even US airlines offer on first class coast-to-coast travel.

Amenity kit: Fine. Had the basics of toothbrush, toothpaste, earplugs, and eye patch. Lacked any sort of premium lip product, facial mist, hand lotion, etc. (which was fine; I rarely end up using those when they’re offered, anyway). Virgin does point out that the kit comes with a “Stylish Pen.”  Uh-huh.  And they’ve pulled off one rather clever feat: they claim they’ve designed the kit to “compliment” [sic] the seat and service.  “Hey!  This seat is brilliant!” I suppose each kit is meant to exclaim when opened.  “And this service is perfectly divine,” it might continue.

Writing is one way to pass the time, since you won't be able to sleep in these seats.

Pricing/use of miles: For sure, we spent fewer miles roundtrip (55,000) then we would have in Business Class (most airlines require 80K+ for business class transatlantic, and in fact some airlines require more than 55K even for economy). But the odd thing here was the high fees: we paid $450 each in “taxes, surcharges, and misc. fees” for the trip. The fees for Upper Class were only about $500, suggesting most of this must be fixed, per-segment charges.  I don’t know that I’ve ever paid such high fees when using miles. (and no, this was not the ‘miles plus money’ offer, which requires even higher payment)

All in all, we were glad we weren’t packed like sardines into economy, but Premium Economy left a lot to be desired. Virgin would probably counter that the “expectation is in the name” (and the lower mileage requirement) so we shouldn’t have been expecting anything close to Business Class amenities. We weren’t (quite)…but the gap between Premium Economy and Business still surprised us. So just don’t kid yourself that the ‘middle’ class on a 3 class international flight is going to necessarily be close to traditional business. Next time, we’ll probably postpone our trip or save our miles until we have enough for a true Business Class experience so that we can – yawn – get some decent sleep before we arrive.

Better than economy, but just barely

This entry was posted in Uncategorized and tagged travel. Bookmark the permalink.